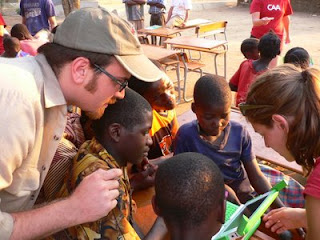 Farhan Lalji has some interesting thoughts posted on his blog at, “Who is Farhan Lalji?” One of the reasons I enjoy reading his posts is that he is actually a contemporary of mine. His is not the most read blog in the world but his thoughts and ideas resonate with the common man – me.

One of Farhan’s last articles spoke about the role that technology can play in educating and thus alleviating the gap between the have’s and have-not’s. While I think we both agree on this we disagree on the method. Farhan says that the governments need to finance and invest in giving everyone free access to the internet.

I disagree. I believe corporations (in this case, “high-tech” companies) and non-governmental organizations (NGO’s) have a vital role in this development issue. Why? They have both the means (the actual technology!) and the reason (profit and development!)

The easiest case to point to would be the Grameen Bank model of development. While not perfect, Muhammad Yunus, the bank’s founder, predicts that there will not be poverty in Bangladesh by 2050.

Another example of successful development is the role of the Aga Khan Trust for Culture. One of the Trust’s mandate is the economic revitalization of historic sites in the Muslim world. Within this context, hundreds of local people have developed new skills and created for themselves employment and business opportunities.

Although these two cases are not specific to the internet and technology, they do point to the success that NGO’s and businesses have in empowering people to positively impact their own world.

I think it is time that instead of individuals and companies/organizations giving handout’s that we/they start giving a handUP.

Can you imagine Twittering with a school kid from Darfur?