Well, I finally finished Think & Grow Rich. And my thoughts will be posted here later this week. Or maybe next week.
But I really wanted to tell all of about a book I’ve been going through. It’s called Blink and was written by Malcolm Gladwell. I will also post my thoughts about this “amazing” book here as well. In the meantime, go and visit him at http://www.gladwell.com/.

Well, it’s less than a year till the next Olympics. Next year China will be in the spotlight. Will it be the pollution, human rights or athletes who will take centre stage? My bet is on the athletic events. But who knows for sure?

However, I hope stories like these come out more often: 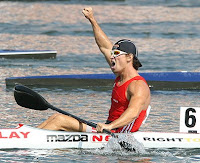 When Olympic kayaking champion Adam van Koeverden showed up at the recent world championships with the Right To Play logo splashed all over his shiny new boat, everybody figured he was cashing in on a big sponsorship with an online gambling service.

But this was a goodwill gesture borne from the Oakville paddler’s desire to boost a good cause, not his bank account.

Right To Play is a Toronto-based humanitarian group which uses sport to help improve the lives of children in the most disadvantaged parts of the world.
In van Koeverden’s case, it wasn’t just Right To Play but also Right To Win.

The 25-year-old demonstrated he’ll be a force to be reckoned with at the Beijing Olympics, capturing his first world title ever in the men’s K-1 500 metres in world record time and just getting pipped for the gold in the men’s K-1 1,000 metres at the championships nine days ago in Duisburg, Germany.

He also generated a lot of attention for the charity as he was constantly questioned about his flashy new boat. Among those inquiring was British rival Tim Brabants, a medical doctor who beat van Koeverden with a brilliant comeback in the 1,000 metres and was just edged by him in the 500 metres.
“Before the weekend was over, he was already in touch with the U.K. office of Right To Play and he’s going to be an athlete ambassador,” said van Koeverden.
“What a positive thing that is. I managed to recruit a world champion, Olympic bronze medallist and a medical doctor to Right To Play all in one.”

Van Koeverden was on his way to Ottawa yesterday for this week’s Canadian championships. He already managed to get posters produced showing him winning at the worlds in his new boat. He plans to autograph and give them away to kids at the event.

Nobody had ever advertised a charity on their boat before on the international canoe-kayak scene before van Koeverden approached the Portuguese firm which builds his boats, NELO, with the idea.

Being soccer fans, the boat builders equated it with FC Barcelona wearing UNICEF on their uniforms and were quite excited by the prospect. So much so that they produced the boat in two weeks for the worlds in Duisburg.

“It’s always, `How much money is 20 square centimetres of (advertising) going to cost me?'” said Van Koeverden. “I always thought that was an F1 kind of thing and it didn’t have to be a kayaking thing. Kayaking’s more wholesome and there’s never going to be as much money involved — and thank goodness — as there is in F1 or cycling or something like that.”

Van Koeverden worries that too much money would corrupt the sport. He’s hoping that his initiative will get other kayakers thinking more globally and following suit.

“Imagine if everyone in the final were racing for a different charitable organization – how cool that would be?” he said.

“It would be like a celebrity poker game, but instead of making money for them you’re getting some publicity for them.”

The 25-year-old McMaster University graduate has declared he’s willing to part with his prized boat for a sizable donation to Right To Play, but he plans to race it here first at a rare competition in Toronto on Sept. 15.

The best paddlers in the world are coming here for the 2007 Mazda Canoe Kayak Knockout at Marilyn Bell Park at Ontario Place. They’ll be competing for prize money in a series of 200-metre races.

It’ll be a more relaxed atmosphere than the high-pressured scene at the worlds, a welcome break for van Koeverden as he starts to gear up for the Beijing Games.

“Does that add pressure?” he asks. “I put pressure on myself to compete well and race well than any sort of figure of statistic could possibly do. It doesn’t really worry me or anything. If anything, it’s just proves I’m the guy to beat. Good.”