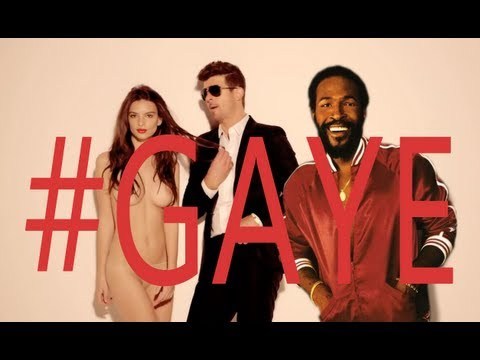 What about this one?

Yup. One copied the other.  This morning an American court of appeals upheld a verdict that the 2013 chart-topper “Blurred Lines” infringed the copyright to Marvin Gaye’s iconic “Got To Give It Up.”

J. Michael Keyes is a partner at the international law firm Dorsey & Whitney.

“In the closely watched music copyright infringement case, a panel of the 9th circuit Court of Appeals, in a 2-1 decision, upheld a jury verdict that Robin Thicke’s “Blurred Lines” (the world’s best-selling single from 2013) infringed the copyright in Marvin Gaye’s song “Got To Give It Up” from the 1970s.  The Court’s decision is noteworthy in a couple of respects.”

“Upholding the jury’s verdict (and the ultimate damage award) could very well mean we see a new wave of additional music infringement lawsuits and claims.  The 9th Circuit majority decision was quite explicit in opining that musical works receive broad protection and that “there is no one magical combination of factors that will automatically substantiate a musical infringement suit.”   That standard is rather noteworthy and leaves quite a bit of play in the joints for future litigants to cobble together a music infringement claim.  In fact, as the dissenting opinion points out, the majority decision seems to give copyright protection to a “musical style” as the two works “differ in melody, harmony, and rhythm,” Keyes says.

“One important but rather technical issue that the court did not decide (and that is directly relevant in the Led Zeppelin Stairway to Heaven appeal pending before the 9th Circuit) was whether the “scope” of copyright protection is dictated by the notes on the printed page (the sheet music) or whether the sound recording can be considered as defining the scope of protection  The trial court ruled that the scope of Gaye’s copyright protection was limited to the sheet music because that is what was submitted to the Copyright Office and what was ultimately registered.  The 9th Circuit assumed, without deciding the issue, that the trial court made the correct decision.  We will need to wait and see how the court deals with this same theme in the Stairway to Heaven case,” Keyes says.

Keyes is an intellectual property attorney with extensive trial and litigation experience in cases involving trademarks, copyrights, unfair competition and false advertising. He has tried several cases in federal courts across the United States. Keyes has a piano performance degree and has written on the issue of music copyright. One of his law review articles was cited extensively in a case in Chicago federal court in a music copyright case brought against Lady Gaga. Before going to law school to work with copyright law, he studied piano and composition at the Tbilisi State Conservatoire in the former Soviet Republic of Georgia.