Just spoke to a good friend of mine who is a landlord of a few properties around the GTA. He says the market is softening and it’s giving him a headache.

And now our FEATURE PRESENTATION.

There’s a Social Networking event happening tonight for interested Realtors in GTA and Durham (Ontario). No, it’s not on Facebook. At THIS event, you actually have to show your face.

The median cost of housing in the Moncton region was $8,323 a year — or $693 a month — in 2006, Statistics Canada reported yesterday in a new report on shelter costs across the country.
John Pasalis chimes in on the “Buy One, Get One FREE” Houses HERE. 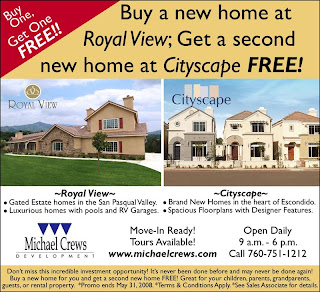 An unprecedented 10-year boom in the market, which ended earlier this year, saw the price of a two-storey detached home rise by an average of 129 per cent in urban centres to $522,999, according to a study released today by Royal LePage Real Estate Services.
In the 10-year period ended March, 2008, the price of a similar property in the suburbs has appreciated by 110 per cent to $334,380.

London Free Press finally heard about Garth Turner’s book. Geez. Who hit the snooze button a few times too many?

Speaking of Turner, here’s his latest…

Dream, Dream, Dream. Whenever I want to, all I have to do, is Dream.
Toronto Home Sales fall for 5th straight month. Ssshhhhhh!
Toronto Condo market cools off. So, no more ridculous line-ups?